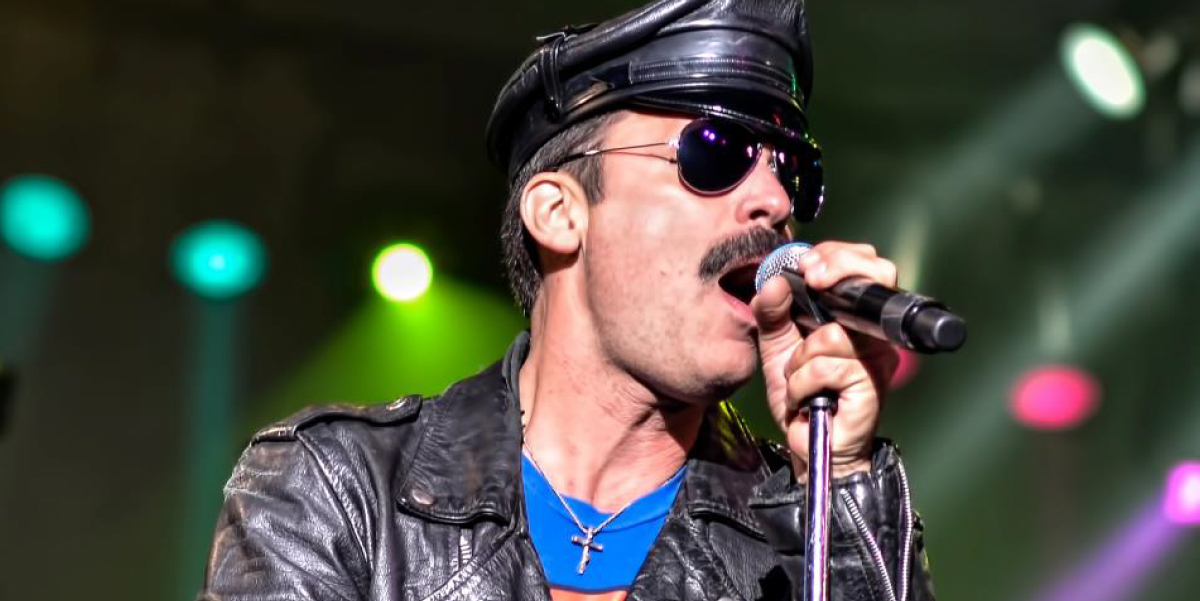 There is little doubt among the pure rock community that the legendary band Queen and lead performer Freddie Mercury earn high ranks as one of the most powerful and iconic groups in rock history. Queen, the kings of arena rock, performed to packed stadiums around the globe for over two decades. Freddie took showmanship by a rock front man to a new untapped level and was undisputedly crowned the lord of arena rock. He mesmerized audiences with his charismatic energy and larger than life stage persona. Upon his death in 1991, a huge void was left in the rock concert world, which to this day has not yet been matched.
Queen Nation, a tribute to Queen, was formed in 2004. Queen Nation consists of: Gregory Finsley on vocals & keyboards as Freddie Mercury, Mike McManus on guitar as Brian May, Pete Burke on drums as Roger Taylor, and Parker Combs on bass as John Deacon. The mission of the show is to carry on the musical torch and pay homage to the golden age of vintage Queen concerts.

Queen Nation’s live 90-minute production of Queen’s greatest hits preserves the image, sound, and stage persona of vintage Queen. Audiences are amazed at the accuracy of Queen Nation’s live retrospective journey through such Queen songs as We Will Rock You – Bohemian Rhapsody – We Are The Champions – Crazy Little Thing Called Love – You’re My Best Friend – Another One Bites The Dust – Under Pressure and many more. They have performed in front of thousands of people at casinos, fairs, festivals and private affairs.

MIKE McMANUS – GUITAR / VOCALS
Born and raised in the suburbs of Boston and weaned on his Dad’s Beatles albums at an early age, Mike could sing every song on the Sgt. Pepper’s album by the age six. It was there he acquired a taste for melodic 70’s arena rock bands such as Queen and Cheap Trick. After High School, Mike enrolled in Berklee College of Music. He soon left Boston for Los Angeles, and began sowing the seeds for what would become the hard rock band, EGODOG

EGODOG released three critically acclaimed albums between 1997 and 2001, and traveled abroad each year performing for the U.S. Department of Defense. These very successful tours entertaining our troops took them to such far away countries as Japan, Bosnia, Kosovo and Hungary.

In 2003, Mike created the musically animated Uncle Moondog, a scruffy-looking terrier who lives on the beach, sings songs and drives a dune buggy. (Check out www.unclemoondog.com) He wrote, recorded and released the 10-song “Uncle Moondog” CD in December 2003, and has received rave reviews across the country and spanning as far as the U.K. and Japan.

In 2004, Mike got a call from singer Joe Retta to complete the line-up for Queen Nation. Looking at it as a labor of love, Mike buckled down and began learning all the guitar parts and transcribing all the harmonies. Not an easy task! Mike stated “I didn’t think I could gain any more respect for Brian May and Queen than I already had… My respect for them DOUBLED when I sat down to learn these songs!” His hard work led to an endorsement with Burns Guitars, maker of the Brian May model. Add to that Mike’s dead-on Brian May mannerisms and accurate stage attire, and you’d swear you were at the L.A. Forum in 1980!
GREG FINSLEY – VOCALS / PIANO
Gregory Finsley has been influenced by music’s greatest heroes since he could turn a radio dial as a child! Having been educated from middle school through high school, jazz and marching bands in Dallas, TX Gregory took up percussion at age 11 and never stopped. His desire to multitask became an easy habit early in life wanting to sing and play the drum set simultaneously and later the piano. Mixing rock, blues, swamp pop, country, and other styles of music in bands, Gregory has played with great musicians in New Orleans since he arrived in 1995. He even played Bourbon St. at the famous Tropical Isle with “Late As Usual” on a weekly basis.Strangely enough, Gregory’s first ever rock concert was Dec, 10, 1977 at Tarrant County Convention Center to see Queen perform being almost 12 years old! Watching the black crown raise up with the mist and smoke, lights and band, he decided he wanted to be a performer no matter what.Aside from his original recordings, Gregory has recorded and performed with many guitarists, piano players, and other vocalists such as John Autin of New Orleans, LA Craig Wallace of Dallas, TX Gary King of New Orleans, LA and even some corporations wanting Queen tunes specialized with different lyrics. His first Queen Tribute (Queen For A Day) was started in Dallas, TX in 2001 by Brian Harris, an outstanding guitarist with a long list of credentials to his name. Gregory, having a cousin living in Los Angeles, introduced him to Queen Nation in 2007 and created an extra push in his musical endeavors, which is now the top performing Queen Tribute in North America.
Gregory’s taste in vocalists, artists, and groups include Stevie Wonder, Police, Tony Bennett, Carly Simon, Ronnie James Dio, James Taylor, Yes, Cab Calloway, Rod Stewart, Paul McCartney, Chrissie Hynde, Gene Krupa, David Bowie, Beatles, Frank Sinatra, The Rolling Stones, CSNY, Badfinger, The Cars, Eric Johnson, Carole King, and the list goes on.
His other professions and hobbies include custom gardening, Depression glass, fishing the bayous, gourmet cooking, wines, nature and artistic photography, antiques, yoga, and strolling the farmer’s markets.

PARKER COMBS – BASS
Parker Combs, longtime Queen fan, started playing standup bass at 12 years old. After spending the next five years playing in school orchestras and spending summers honing his craft at Interlochen Performing Arts Academy in Michigan he graduated to the electric bass. He has spent the last 18 years playing original and cover music in a variety of rock, funk and country bands. “Playing with Queen Nation has allowed me to use my classical and rock background to truly appreciate John Deacon’s Musicianship and re-discover the music and history of Queen.

PETER BURKE – DRUMS / VOCALS
Peter Burke has been active in the LA music scene since the mid-90s. Originally inspired by classic rock bands like AC/DC, Aerosmith, and Led Zeppelin, the first album he ever bought was Queen’s “The Game”. In college he developed a love for jazz and classical music, performing throughout Europe with the CSUN Symphony Orchestra and statewide with renowned Jazz “A” Band. He earned Bachelor of Music Degree in Percussion Performance from Cal. St. Northridge in 2000.

Peter began his professional career playing with the band 10 Speed, signed to A&M Records. They released their debut album internationally in 1998, and embarked on a coinciding tour of the U.S. and Europe.
Throughout the first decade of the new millennium, he worked several platinum-selling recording artists including Wilson Phillips, Tiffany, and the BulletBoys. Highlights included appearances on TV shows “The Tonight Show with Jay Leno”, “Good Morning America”, and “On Air with Ryan Seacrest” with Wilson Phillips in support of their Columbia release “California” in 2004, and 2 albums recorded with the BulletBoys [“Sophie” with the help of legendary producer Andy Johns (Led Zeppelin, Rolling Stones), and “Live: Behind the Orange Curtain”].

Also highly regarded as a studio drummer, many of his recordings have appeared in major motion pictures and TV shows. Songs from the 2006 debut album of the band “The Skies of America” with famed producer Sylvia Massey Shivy (Chili Peppers, Tool, Smashing Pumpkins) have appeared in movies “The Bridge to Terabithia”(Disney), National Lampoon’s Van Wilder II, and “Eulogy” (Myriad Pictures). He’s also recorded with Joseph Arthur (for “One Hour Photo”, with Robin Williams), and Paperback Hero, who have had songs placed in TV shows “Friday Night Lights”(NBC), “Shark”(CBS), and “Felicity”(WB).
Paperback Hero recently finished up its new Full length album, entitled “Cautionary Tale” with producer Jay Ruston (The Donnas, Steel Panther, Army of Freshman) for a 2010 release. Paperback Hero also recently won the KYSR – 98.7 FM (Clear Channel/Los Angeles) “Rock Star 3” competition – among the prizes was $25,000, and a performance at the opening of the new Grammy Museum @ LA Live on the Nokia Plaza to a crowd of more than 3000 fans.

As a performer in tribute bands, you can catch Peter playing drums with Queen Nation (Queen), The Who Revue (The Who), and Holy Diver (Dio). Also, he currently plays vibraphone in Shades of Jade: A Tribute to Cal Tjader.