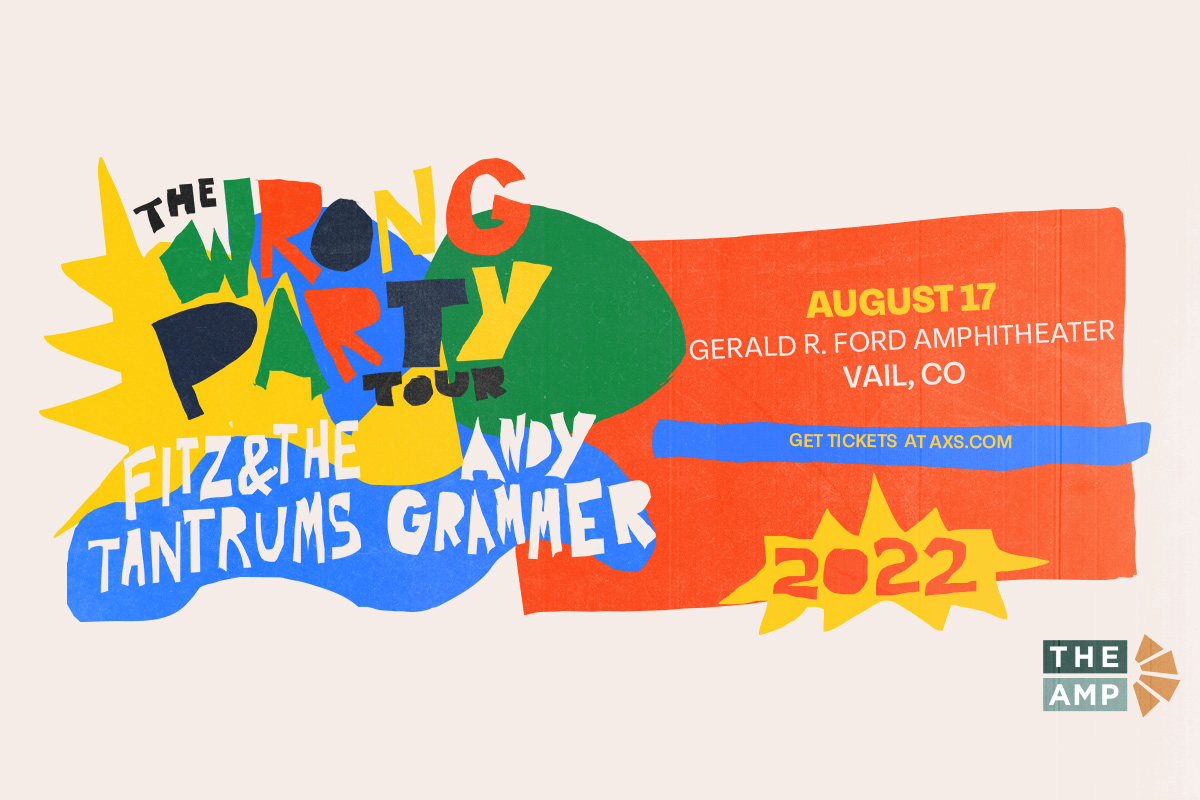 Fitz & the Tantrums and Andy Grammer

FITZ & THE TANTRUMS and ANDY GRAMMER – THE WRONG PARTY TOUR

About Fitz & The Tantrums: Multi-platinum artists Fitz and the Tantrums have quickly grown from independent upstarts to bonafide hitmakers. The LA-based band recently released their much-anticipated, fourth full length album “ALL THE FEELS,” featuring singles “123456” and “I Just Wanna Shine.” “ALL THE FEELS” follows the band’s 2016 release “FITZ AND THE TANTRUMS,” which spawned the group’s biggest hit to date, “HandClap.” The RIAA-certified 2x Platinum single has logged more than 400 million global streams, went top 5 on both the Hot AC and Alternative Radio charts, and also enjoyed major airplay across the country at Top 40. The band has brought the infectious energy of their live shows to the small screen, with nationally televised performances of “HandClap” on ABC’s “Dancing With The Stars,” “Good Morning America,” and “Jimmy Kimmel Live!,” NBC’s “TODAY,” “Tonight Show Starring Jimmy Fallon,” “America’s Got Talent,” and Macy’s Thanksgiving Day Parade, and the syndicated “Ellen DeGeneres Show” among others.

Fitz and the Tantrums’ eponymous album followed their breakout major label debut, “MORE THAN JUST A DREAM,” which featured back-to-back Platinum-certified, #1 Alternative Radio singles in “The Walker” and “Out Of My League.” Both singles also enjoyed Top 15 success at Hot AC. The band has performed countless, sold out headlining shows and is always a standout at music festivals around the world, including Coachella, Bonnaroo, Lollapalooza, Austin City Limits, and more.

About Andy Grammer: Multiplatinum troubadour Andy Grammer continues to engage, energize, and empower audiences with stomping stadium-size pop anthems meant to be shared at full volume. His observations and affirmations pick you back up when you need it, affirm your potential, and encourage you to keep going. His catalog consists of numerous bona fide hits, including the quadruple-platinum “Honey, I’m Good,” platinum singles “Keep Your Head Up,” “Fine By Me,” “Don’t Give Up On Me,” “Fresh Eyes,” “Good To Be Alive (Hallelujah),” gold single “I Found You,” and the gold albums Andy Grammer and Magazines Or Novels. He has quietly generated billions of streams and lent his music to films such as Five Feet Apart. When “Don’t Give Up On Me” sound tracked ESPN’s 13thAnnual V Week for Cancer Reach, he garnered a Sports Emmy for Outstanding Music Direction and a Clio Award. Beyond selling out shows on multiple continents, he has electrified dozens of television shows, including The Today Show, Jimmy Kimmel LIVE!, Good Morning America, American Idol, The Tonight Show Starring Jimmy Fallon, and The Late Late Show with James Corden in addition to appearing as a contestant on Dancing with the Stars. Most recently, his 2019 offering, Naïve, arrived to widespread critical acclaim. Parade attested, “Each song on the album magically pinpoints its emotional target with brilliant composition and performance,” and People hailed it as “touching.” Once again, he makes a connection on his forthcoming fifth full-length album led by the song“ Lease On Life.”+

TICKETS ARE ON SALE NOW!

A dollar from the proceeds of each ticket will be donated to Diversify The Stage, a social impact organization supporting underrepresented communities & next-generation leaders looking to break into live entertainment and production careers.

VIP merchandise will be distributed at the show. Customers can contact INFO@FUTURE-BEAT.COM with any questions regarding their purchase.