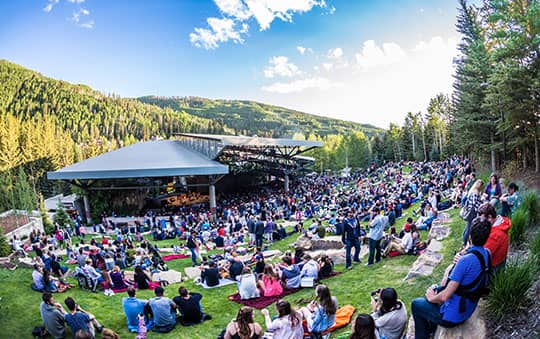 Each summer, the Gerald R. Ford Amphitheater in Vail plays host to an array of cultural and entertainment offerings, ranging from internationally renowned dance and classical music presentations, courtesy of the Vail Dance Festival and the Bravo! Vail Valley Music Festival, to the free weekly concerts of the Hot Summer Nights series. In addition, local chorale and theater presentations annually grace the Amphitheater stage, while headlining concerts round out the summer calendar. 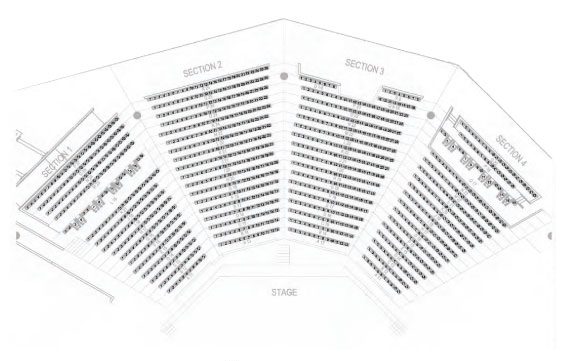 The GRFA provides reasonable accommodations to persons with disabilities, including those with limited mobility. View ADA Venue Access Map HERE. 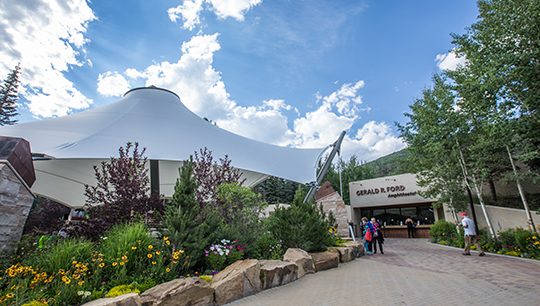 The Amp Box Office is located at 530 S Frontage Rd East in Vail, CO, adjacent to the Betty Ford Alpine Gardens and Ford Park. The Box Office is open daily from 11am to 5 pm or through intermission on any performance evening (mid-May to early September). In the winter and spring when the venue is closed, tickets may be purchased at the Vilar Performing Arts Center Box Office in Beaver Creek.

Ticketsvail.com is the official online ticketing provider for Vail Valley Foundation events at The Amp such as Amp Summer Concerts and the Vail Dance Festival. Bravo! Vail Music Festival tickets can be purchased at bravovail.org.

Tickets & programming are subject to change. One ticket per person. Children over the age of two must have a ticket. Additional fees may apply to any purchase. ALL TICKET SALES ARE FINAL. NO REFUNDS. NO EXCHANGES.

Lost Tickets: If you are unable to locate your tickets, please contact the box office to reprint them. Please note a reprint voids all previous tickets. Reprint fees may apply.

ADA Accessible Tickets: The GRFA provides reasonable accommodations to persons with disabilities, including those with limited mobility. ADA Accessible seats are available. Scroll down to learn more.

ACCESSIBILITY AT THE AMP

The Amp provides reasonable accommodations to persons with disabilities, including those with limited mobility. Click the button below for information regarding accessibility features, policies, and recommendations for your visit. 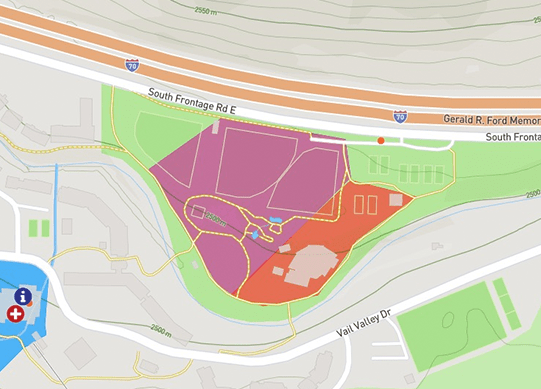 The Amp is located at 530 S Frontage Rd East in Vail, CO, adjacent to the Betty Ford Alpine Gardens and Ford Park.

Driving directions: Take exit 176 off I-70. Head south toward Vail mountain, into the main Vail roundabout. Exit the roundabout so you are heading east on South Frontage Road. The Vail Parking structure will be a short distance up on the right, where summer parking is FREE. Alternatively, you can continue on to the Ford Park parking lot, where attendants will collect cash for paid parking.

Walking directions: From the Vail Village parking structure, exit to the east. Walk northeast toward the softball fields until you see the paved walkway into the park on your right. Follow that path straight down to the Amphitheater. Golf carts run frequently between the top of the path and the venue prior to and following shows. You can also take the Gore Creek Trail directly to the venue. See maps below.

From the Ford Park parking lot: look for the bike path at the southeast end of the tennis courts. Follow the path directly downhill to the Amphitheater.

Free Vail Bus: From the Vail Village or Lionshead parking structures, guests may hop on a free bus to get to The Amp. There are a couple of bus routes to choose from including Golf Course, East Vail, or Intown. Click HERE to view the bus schedule and map.

Parking: Limited paid parking is available at Ford Park, located northeast of the Amphitheater on the Frontage Road, and at the Soccer Field, located southeast of the Amphitheater on Vail Valley Drive. Free parking is available in the summer at the Vail Village and Lionshead Village Parking structures, both a short walk or shuttle ride to the venue. Courtesy cart service is provided to the facility on a regular basis before and after each performance for those needing transportation assistance. 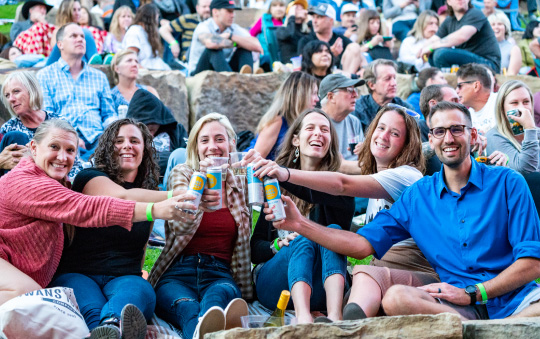 Guests can take advantage of our various concessions areas in the venue that offer a wide array of alcoholic and non-alcoholic beverages. We also offer snacks like pretzels, popcorn, and candy. In addition, guests can purchase food from our grill including tasty burgers, brats, tacos, and more!

CHECK OUT THE MENU

Redemption: Gift Certificates can be redeemed over the phone, in person or online. To redeem by phone: call us at (970) 845-8497 To redeem in person: come to the box office at the Gerald R. Ford Amphitheater in Vail or the Vilar Performing Arts Center in Beaver Creek (open year-round) To redeem online: choose the “Pay with a Gift Certificate” option on the billing page

WHAT TIME DO GATES OPEN?

Gates to the venue open one hour prior to showtime unless otherwise printed on your ticket.

The Gerald R. Ford Amphitheater can host up to 2,800 guests within the pavilion and lawn seating areas. Please note that the venue tends to fill up quickly, so we recommend arriving when the gates open.

All tickets sales are final. No refunds or exchanges.

The Amphitheater stage and pavilion seating sections have a large roof protecting it from adverse weather. The Vail Valley is famous for afternoon and evening hit-and-run rain showers. Weather is generally not a factor for most shows. We encourage you to check weather forecasts prior to attending a show at the venue.

Should a performance be changed or postponed due to weather conditions, announcements will be made on the Amphitheater website and social channels regarding pertinent details.

The Betty Ford Alpine Gardens is an internationally acclaimed botanic gardens known for its alpine horticulture, education and conservation, and is the highest elevation botanical garden in the world situated at 8,200’ (2,700 m) in the central Rocky Mountains. The Gardens attracts more than 100,000 visitors annually to see its unique collection of alpine and mountain plants collected from around the world.

The Gardens is located to the west of the Amphitheater. More information about the Gardens can be found at their main website or in Vail at the Betty Ford Alpine Gardens Education Center.

+-
WHAT ARE THE CONCESSION OPTIONS AT THE AMPHITHEATER?

We plan to offer a wide range of beverage and food options this summer. Check out the concessions offerings HERE.

*Guests are allowed to bring food into the venue so long as it is done within venue bag policies. Picnics and commercially sealed non-alcoholic beverages are permitted.

+-
WHAT ARE THE BOX OFFICE HOURS?

The Box Office is open daily from 11am to 5pm or through intermission on any performance evening, June through mid-September.

The Gerald R. Ford Amphitheater opened in June 1987. The opening ceremony was attended by its namesake, the 38th president Gerald R. Ford, along with Mrs. Ford, Bob Hope, and many other luminaries and Vail pioneers.

Willie Nelson performed the first summer, and the Hot Summer Nights concert series was launched along with the first free Patriotic Concert performed by the Colorado Symphony.

The Bravo! Vail Valley Music Festival held its first performance at the amphitheater in 1988. That same year, the Amphitheater gained another dimension with establishment of the adjacent Betty Ford Alpine Gardens, the highest botanical gardens in the world. Yet another milestone was notched in 1989 when the Bolshoi Academy of Moscow performed at the Ford Amphitheater, thus launching the first iteration of what would become the Vail Dance Festival.

From the original architecture of Morter Architects, to its subsequent remodels from Morter in 2000 as well as Zehren Architects in the later creation of the lobby area, the building itself has become a marvel of its own.

In retrospect the venue’s creation at the base of Vail Mountain, with a view of the Gore Range to the east, seems clear as a bluebird Colorado sky. In the mid-80s, however, some saw the building’s creation as a potential risk.

“There were people who argued, ‘Who is going to go way out there to see performing arts?’” said Mike Imhof, current President and CEO of the Vail Valley Foundation. “It was still relatively early in the Vail Valley’s development, and there were folks who considered a summertime, outdoor venue on the ‘edge of town’ as a bold endeavor.”

Today, the 2,500+ seat venue hosts big names in rock, country, and bluegrass; it is home base for Bravo! Vail’s lineup including the New York Philharmonic; it hosts the world’s top talent at the Vail Dance Festival each summer; and it is home to community events, graduations, and a host of ceremonies that, together, make it an central gathering place for everyone who loves Vail in the summertime.

The Ford Amphitheater structures are owned and operated by the Vail Valley Foundation, who operate the venue on a long-term lease of land from the town of Vail.