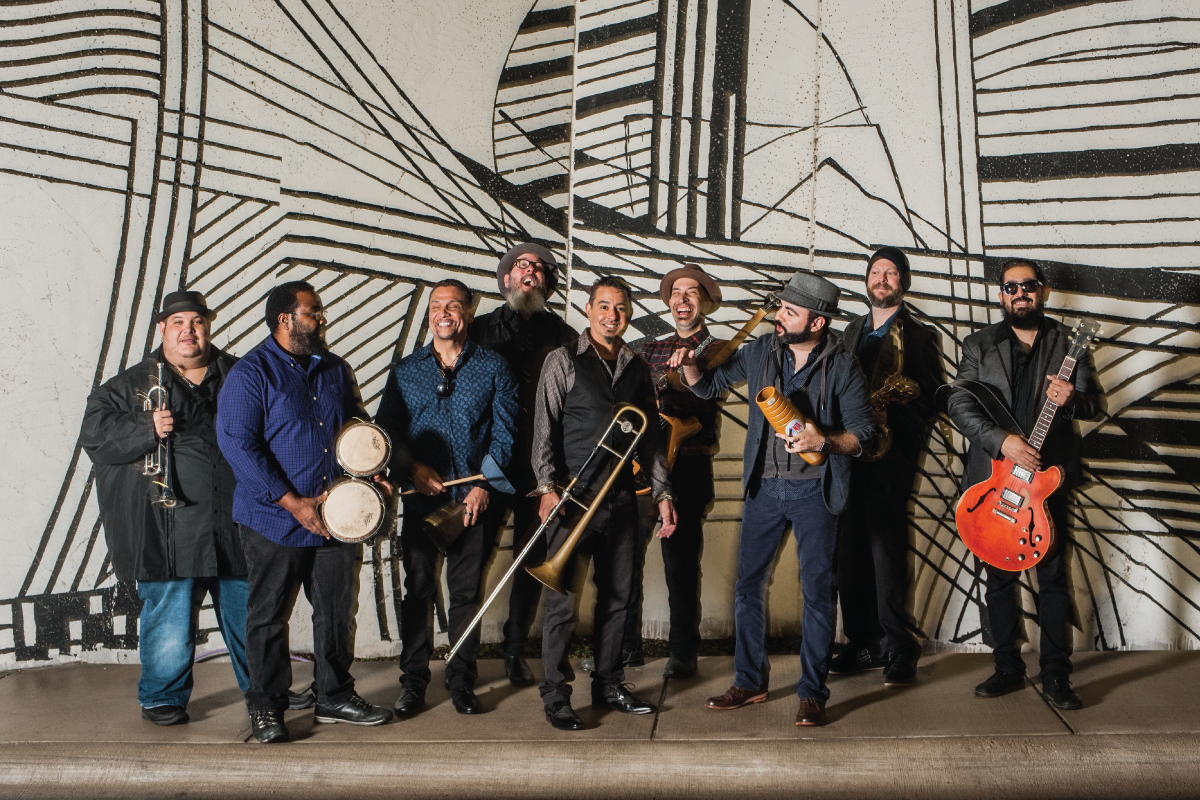 Austin’s Grupo Fantasma enters their 19th year as a band with an exciting new record and a fresh take on their unique sound. With six previous albums in their back catalog, plus collaborations and backing gigs with the likes of Prince, Spoon and Los Lobos, not to mention a GRAMMY award and a loyal fan base, they are ready to turn people’s heads again with American Music: Vol. VII (Blue Corn Music).

It’s been five years since they’ve been in the studio, and this time around they’re working with the multi-talented Carlos “El Loco” Bedoya, a highly regarded Miami-based Colombian producer, audio engineer, musician, and songwriter. His credits are extensive, having worked with artists as diverse and successful as Beyoncé, Weezer, and ChocQuibTown. According to the band, Bedoya “brought with him a wealth of knowledge and experience as mixer and engineer as well as huge ears and skills as a musician and songwriter.” In addition, Grupo has changed recording facilities and composing scenarios, and are collaborating with special guests more extensively, as well as experimenting with a lot of new, interesting instrumentation, all of which contribute to the record’s familiar yet powerfully fresh vibe.

It’s important to stress that Grupo has always had a special polyglot flavor that is an amalgamation of disparate sonic and thematic elements that defy easy characterization and seem to cohere with an impressive naturalness and grace. It’s an expansive and layered sound too, with two lead singers, multiple percussionists, a big brass section, prominent electric guitar, catchy bass lines, plenty of changes, and a whole plethora of influences. Thematically, the band’s lyrics range from the personal to the universal, the political to the social, from party tunes to down-tempo laments that carry the weight of romance gone wrong, loss and disappointment. So in these respects, nothing has radically changed with this new album. Yet there are definitely differences as well.

For instance the track “LT” is not only sung in English (a rare occurrence with the band) but features a guitar sound that is inspired by ‘70’s Turkish psychedelia plus the dhol drumming of Red Baraat’s Sunny Jain. Several songs feature Colombian folkloric instrumentation of gaita and maracas, as well as accordion work that calls to mind both Colombian vallenato and Tex-Mex courtesy of Mr. Vallenato and Josh Baca (from the Grammy winning Texmaniacs). In a first for the band, an outside lead vocalist, Tomar Williams (of Tomar and the FC’s), was brought in for the boogaloo cut “Let Me Be” which also features him playing electric organ and the backup vocals of the Soul Supporters.

“The Wall” is another collaborative effort featuring members of Ozomatli and Locos Por Juana that swings from hard Latin funk to hip-hop, like a modern-day take on War or Mandrill. According to the band, the song “questions the definition of an ‘immigrant’ and what makes one illegal.” While Grupo isn’t really known for being overtly political, “The Wall” speaks volumes about what has been going on in terms of immigration, borders, homeland security and identity politics during the current divisive administration. The album was recorded at Sonic Ranch, the world’s largest residential recording complex and long on Grupo’s bucket list, located in the tiny border town of Tornillo, Texas, which, soon after Grupo finished their sessions at the ranch, became infamous as the site of an enormous and shameful immigrant detention center where countless children were housed separately from their families. As the band says, “this dissonance certainly impacted the album and inspired our message later on as we were creating lyrics and forming the message of the songs and the project as a whole.”

Indeed, the very title of the record takes issue with these definitions of identity, borders and who is illegal or “other.” As the band says, calling it American Music: Vol. VII was a “direct response to the concept of identity as well as the pigeon-holing of our music, which we’ve dealt with throughout our careers.” In presenting their unique multi-ethnic musical mix to audiences over the years, Grupo were constantly challenged by “the concept of identity, citizenship, and the nationality of music,” especially in the press and music industry. Yet, as they attest, in many ways “music is the ultimate assimilator, crossing borders and cultures and mutating to represent the experiences of its performers.” Though often labeled as Latin, the band feels they do not have a national identity other than that of being from the US and in this way, Grupo’s music is an inspiringly honest expression of their multicultural American experience. None of the band members can look to a recent homeland in Latin America other than singer/percussionist José Galeano, hailing from Managua, Nicaragua, but now a long time US citizen who calls Texas his home. Though Grupo has lyrics in Spanish and certainly references the musical traditions and rhythms of their heritage, they stress that “we also embrace and express the music of our home in Texas and American culture which we inhabit daily. We maintain that regardless of language, our music is ‘American Music’ because we are from here. Our music is a product of our circumstances and we can still celebrate ethnic and cultural heritage while asserting our identity as Americans and sons of this country.”

Though the half-decade since Problemas was recorded has been full of touring and creatively enriching side projects like Brownout, Brown Sabbath and Money Chicha, the band feels that “the fact that we were able to regroup and rally around new inspiration for a whole new release as we enter our 19th year is a feat unto itself for us. We know many bands don’t make it this far and this long.” Thankfully for their old fans—and the many more newbies this album is sure to gain—Grupo Fantasma has not only survived with their sound, vision and integrity intact, they have honed and improved their musicianship and compositional skills while managing to address meaningful, urgent issues in a thoughtful, non-dogmatic way, and thus have matured, evolved and been inspired to make their best, most impactful album yet.