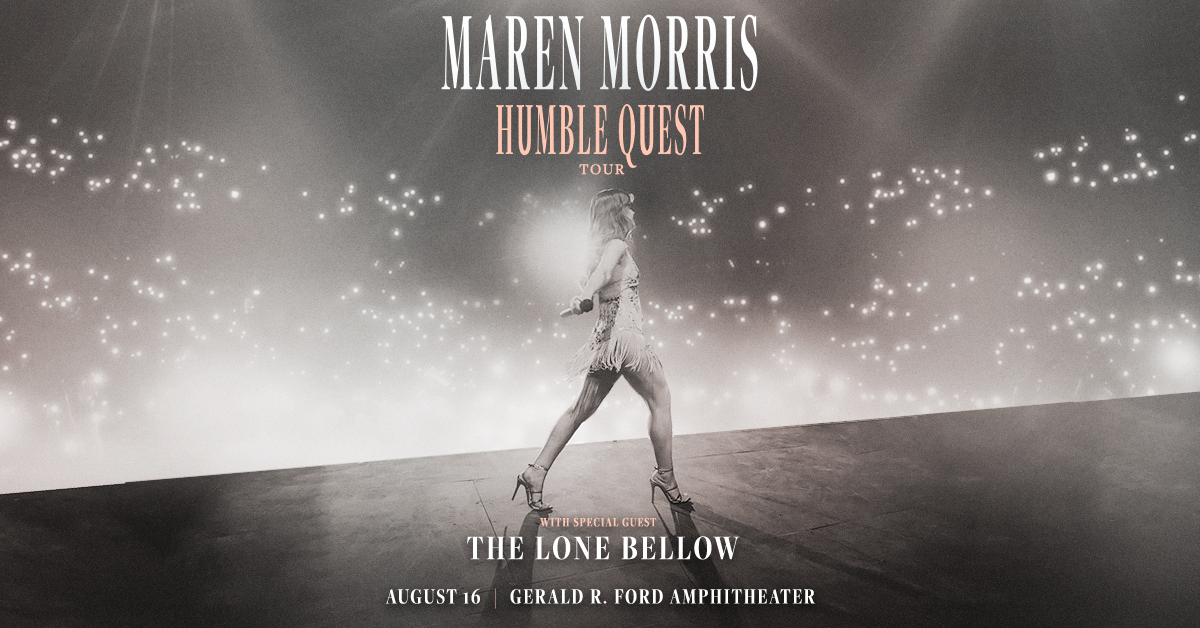 WITH SUPPORT BY THE LONE BELLOW

Maren Morris began writing and performing music at local honky-tonks when she was just 12 years old. Eight years later, she moved to Nashville to pursue her country music career, focusing on songwriting for both Tim McGraw and Kelly Clarkson before returning to her roots as a performer. In 2016, she debuted her first major label album, “Hero.” Her lead single, “My Church,” earned her four Grammy nominations and one win in 2017.

While rooted in the country music genre, her music also blends elements of pop, R&B and rock. In addition to the Grammy Award, the Texas-born musician has five Academy of Country Music Awards, one American Music award and five Country Music Association Awards.

Maren’s new album Humble Quest is out March 25 on Sony Music Nashville’s Columbia Nashville imprint. Thus far, Maren has shared two singles from Humble Quest—“Circles Around This Town,” which broke Amazon Music’s record for most streams for a country song debut by a female artist and was praised by Rolling Stone for its “ambling groove that’s unhurried and bolstered by a grunge-lite guitar riff” and “Background Music,” which Billboard called a “lovely, dusky ballad” that “highlights the best of her R&B/country blend.”

Additionally, Maren is nominated for Female Artist of the Year at the 57th Academy of Country Music Awards. Furthermore, she is nominated for two Grammy awards this year: Best Country Song for “Better Than We Found It” and Best Country Duo/Group Performance for “Chasing After You,” the #1, Platinum-certified collaboration with her husband Ryan Hurd.

Maren began writing the songs on Humble Quest in the beginning of the pandemic as a series of major life changes unfolded—new motherhood, an upended career, the death of beloved friend and collaborator Michael Busbee and more, further compounded by lockdown. She felt control over life quickly slipping until she had an epiphany—she was never in control in the first place. This inspired her to reckon with the concept of humility as she thought about how the goal of appearing humble puts artists, especially women, in a box with unrealistic demands. Humble Quest documents Maren’s journey to redefining humility on her own terms as a grounded state of understanding one’s own truth rather than the capacity to appear authentic to others.

Produced by frequent collaborator Greg Kurstin (Adele, Paul McCartney, Foo Fighters) and written alongside her husband Ryan Hurd, Julia Michaels, Jimmy Robbins, Natalie Hemby, Laura Veltz and Jon Green on Busbee’s piano, Humble Quest is Maren’s most genuine collection of songs, tracing her journey to embrace the imperfections in her life through snapshots of her rises and falls, overshares, lullabies, wine-soaked conversations with one old friend and a final goodbye to another one. “Am I humble enough now?” Maren asks herself sometimes. “Maybe. Or maybe I still haven’t found it yet. Or maybe, who cares as long as your friends and, most importantly, you know what your heart is all about? But here’s to taking the quest to find out.” Read Maren’s conversation with The New York Times about the making of Humble Quest here.

TICKETS ARE ON SALE NOW!

The Sonnenalp Hotel in Vail is offering 15% off your stay on August 16. The rate is based on availability.

*Location may vary by venue. See specific date for details.
**Package does not include artist participation.
***Local liquor laws apply.

*See specific date for details.
**Package does not include artist participation.

Package details subject to change without notice. Your merchandise items that are included in the package will be available for pickup at the venue the day of the show. All VIP tickets will be issued at the designated VIP check in location (or other designated location at the venue) prior to the show on the date of the event only. CHECK-IN LOCATION & TIME INFORMATION WILL BE EMAILED OUT BY VIP NATION (from touralert@vipnation.com) 3-5 DAYS PRIOR TO THE DAY OF THE SHOW. If you have not received this 3 days before the show please contact us immediately (info@vipnation.com). All packages are will-call only (ticket will be at VIP Nation check-in) except for in the states of NY, VA, CT, UT & CO. All packages are NON-REFUNDABLE. All sales are final. You must bring a valid PHOTO ID matching the PURCHASER NAME on this order. Those who cannot present a photo ID matching the PURCHASER name on the order will be turned away. You may be required to sign a waiver & release of liability. If you have any questions regarding the ticket portion of your purchase or have not received your confirmation email, please email boxoffice@vvf.org or call (970) 845-8497. Maren Morris VIP Packages CANNOT BE RESOLD. All package elements will be rendered invalid if resold. Please check with the venue directly for any age restrictions. If you have ACCESSIBLE needs: please call or email our customer service representatives as soon as you have placed your order, and we will do our best to accommodate your needs based on availability. If you have any questions about VIP packages please email info@vipnation.com or call (888) 458-8297.