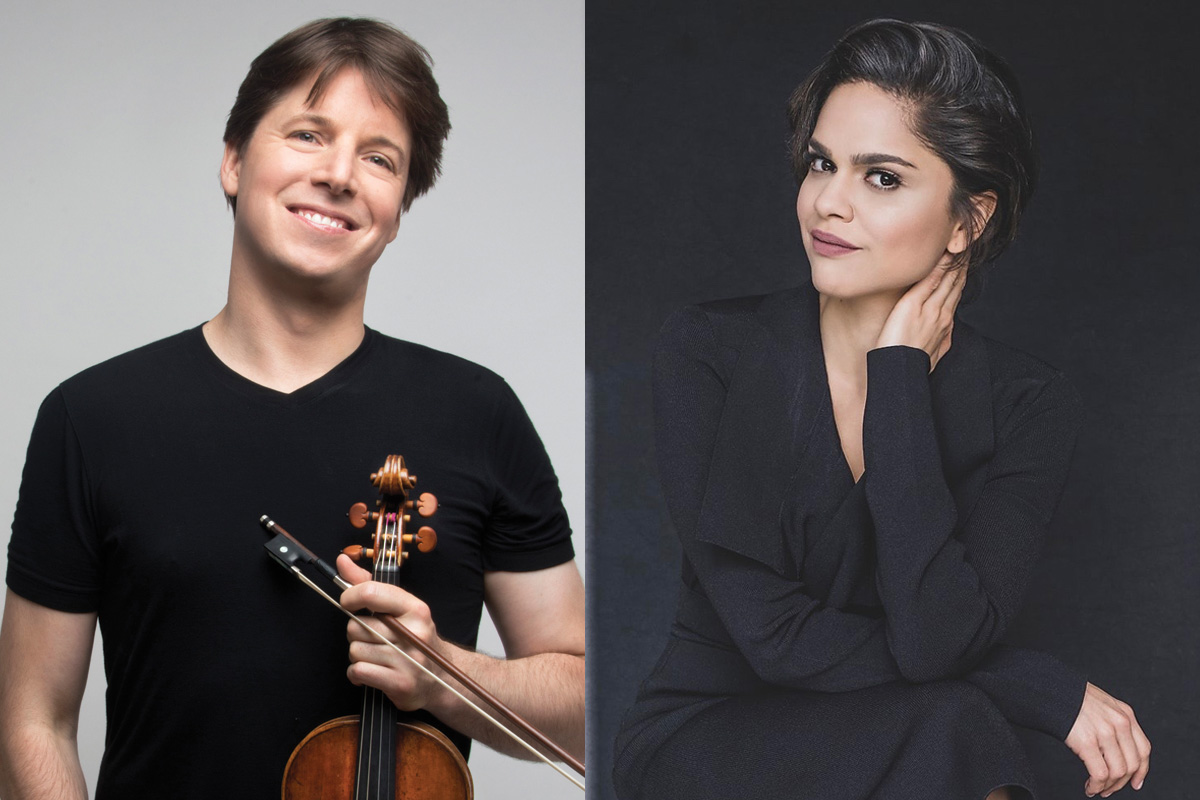 Brought to you by the Vilar Performing Arts Center!

Live at the Gerald R. Ford Amphitheater in Vail, CO for a special one of a kind performance. Tickets are limited. Purchase early!

The illustrious violinist Joshua Bell will appear for a unique return-performance at the Vail Valley Foundation’s Gerald R Ford Amphitheater on August 14, joined by his wife and newest musical collaborator, soprano vocalist Larisa Martínez. Pianist Peter Dugan will accompany the pair in this special trio recital.

The evening marks a number of notable “firsts,” including Martínez and Bell’s first in-person performance since the COVID shutdown, the live premiere of their new work, “Voice and the Violin (following a recent virtual debut),” and the Vilar Performing Arts Center’s first remote production at The Amp.

With a career spanning over thirty years as a soloist, chamber musician, recording artist, conductor and director, Joshua Bell is one of the most celebrated violinists of his era. Since 2011, Bell has served as Music Director of the Academy of St Martin in the Fields, succeeding Sir Neville Marriner, who formed the orchestra in 1958. Bell’s interests range from the repertoire’s hallmarks to commissioned works, including Nicholas Maw’s Violin Concerto, for which Bell received a GRAMMY® award. He has also premiered works of John Corigliano, Edgar Meyer, Jay Greenberg, and Behzad Ranjbaran.

Bell maintains an avid interest in film music, commemorating the 20th anniversary of The Red Violin (1998) in 2018-19. The film’s Academy-Award winning soundtrack features Bell as soloist; in 2018, Bell brought the film with live orchestra to various summer festivals and the New York Philharmonic. In addition to six Live From Lincoln Center specials, Bell is also featured on a PBS Great Performances episode, “Joshua Bell: West Side Story in Central Park.”

Through music and technology, Bell further seeks to expand the boundaries of his instrument. He has partnered with Embertone on the Joshua Bell Virtual Violin, a sampler created for producers, engineers, and composers. Bell also collaborated with Sony on the Joshua Bell VR experience.

Bell advocates for music as an essential educational tool. He maintains active involvement with Education Through Music and Turnaround Arts, which provide instruments and arts education to children who may not otherwise experience classical music firsthand.

Born in Bloomington, Indiana, Bell began the violin at age four, and at age twelve, began studies with Josef Gingold. At age 14, Bell debuted with Riccardo Muti and the Philadelphia Orchestra, and debuted at Carnegie Hall at age 17 with the St. Louis Symphony. Bell received the 2007 Avery Fisher Prize and has recently been named Musical America’s 2010 “Instrumentalist of the Year” and an “Indiana Living Legend.” He received the 2003 Indiana Governor’s Arts Award and a 1991 Distinguished Alumni Service Award from his alma mater, the Jacobs School of Music.

Bell performs on the 1713 Huberman Stradivarius violin, with a François Tourte 18th-Century bow.

Highly praised for her warm quality of voice and unique timbre, soprano Larisa Martínez has established a strong, unique presence in the classical performance world. Ms Martínez was recently seen as Violetta in Wichita Opera’s production of La Traviata, and as Maria from selections of West Side Story with Lawrence Foster and Michael Fabiano at Festival Napa Valley. She has also collaborated with violinist Joshua Bell on the Emmy-nominated PBS special, Live from Lincoln Center: Seasons of Cuba. As part of the same project, she has traveled to Cuba as part of the artistic delegation sent by former president Barack Obama to expand cultural collaboration and bonds of friendship between the two countries.

Ms. Martinez made her Kennedy Center recital debut in September 2019 and her Carnegie Hall debut In October 2019 at the Stern Auditorium/Perelman Stage singing Mahler’s Symphony No. 2 “Resurrection” with the Athens Philharmonic led by Yiannis Hadjiloizou. For the last two years, Ms. Martínez has been touring with Andrea Bocelli, debuting at Madison Square Garden and throughout North America, South America, and Europe. Notable appearances in the 2019-20 season include with the Grand Rapids Symphony, the San Diego Symphony, and a return to Festival Napa Valley.

Ms. Martínez made her debut in 2010 as Luisa Fernanda in Zarzuela, presented at the Centro de Belles Artes de Puerto Rico. In New York, she sang Corinna in Rossini’s Il Viaggio a Reims, earning the praise of Fred Cohen from Opera News, who wrote, “Ms. Martínez cut an elegant figure, the grace of her stage deportment matched that of her singing.” She also earned raves from Roark Littlefield for Musetta in Loft Opera’scritically acclaimed production of La Bohème in 2014. “As Musetta, Larisa Martinez is delightful, embodying every nuance of that infamously charismatic character.” She was also lauded for her roles of Fire/Rossignol from L’enfant et les Sortilèges and Rosario in Granados’ Goyescas with Bare Opera in New York. In July 2016, she created the role of Isaura in the world premiere of Mercadante’s Francesca da Rimini in Martina, Franca, Italy conducted by the Metropolitan Opera’s Principal Conductor, Fabio Luisi. Other roles in her repertoire include Gilda, Juliette, Adina, Norina, Susanna, Giulietta and Lucía di Lammermoor.

An avid recitalist with a passion for art song and theater, Ms. Martínez has been showcased at the American Songbook with Michael Feinstein, Lyric Chamber Music Society and Music Talks Series in New York, the Savannah Voice Festival, Bay View Music Festival in Michigan and internationally with the Franz Schubert Society in Austria, and L’Art du Chant Francais across southern France. Her concert appearances include Mahler’s Symphony No.4, Mozart’s Requiem in D minor and Voci di Domani concert presented by Renata Scotto and recorded by Euroclassics in Rome, Italy.

Ms. Martínez is a winner of the Metropolitan Opera National Council Audition PR district in 2016, where she also received the Angel Ramos Foundation Award and the Audience Prize. She was invited by the Metropolitan Opera Guild 2018 Annual Gala as a guest artist to honor Anna Netrebko. In 2018, Ms. Martínez also recorded Voices of Opera with tenor Carlton Moe, a new virtual instrument produced by EastWest Sounds in Los Angeles.

Ms. Martínez studied at the Music Conservatory of Puerto Rico, received her Bachelor’s degree with high honors in Environmental Sciences from the University of Puerto Rico, and holds a Master’s degree from Mannes the New School for Music. Ms. Martínez is a proud artistic resident of Turnaround Arts, led by the Presidential Committee on the Arts and the Humanities.

Pianist Peter Dugan’s debut performances with Michael Tilson Thomas and the San Francisco Symphony were described by the Los Angeles Times as “stunning” and by the SF Chronicle as “fearlessly athletic.” He is heard nationwide as the newly announced host of NPR’s beloved program From the Top. He has appeared as a soloist, recitalist, and chamber musician across North America and abroad. This year he makes his debuts at Wigmore Hall and the Chamber Music Society of Lincoln Center and can be heard as the piano soloist on a new release of Ives’ Fourth Symphony from Tilson Thomas and the San Francisco Symphony, a recording which the New York Times named one of the top classical albums of 2019 . Prizing versatility as the key to the future of classical music, Mr. Dugan is equally at home in classical, jazz, and pop idioms.

A sought-after multi-genre artist, Mr. Dugan has performed in duos and trios with artists ranging from Itzhak Perlman and Renee Fleming to Jesse Colin Young and Glenn Close. The Wall Street Journal described Mr. Dugan’s collaboration with violinist Charles Yang as a “classical-meets-rockstar duo.” Mr. Dugan has been presented in chamber music recitals by Carnegie Hall, Chamber Music Society of Palm Beach, Music at Menlo, Moab Music Festival, and recently in recital with Joshua Bell at the Minnesota Beethoven Festival. He was the 2019 featured recitalist for the California Association of Professional Music Teachers, and has soloed with the San Francisco Symphony, Houston Symphony, Kansas City Symphony, New World Symphony, and Mid-Texas Symphony.

His debut album with baritone John Brancy – A Silent Night: A WWI Memorial in Song – pays homage to composers who lived through, fought in, and died in the Great War. Brancy and Dugan toured this program across North America in commemoration of the centennial of WWI, including performances at The Kennedy Center, Alice Tully Hall, Stanford University, the United States Naval Academy, and the Smithsonian Institute. Together Brancy and Dugan won first prize at the 2018 Montreal International Music Competition and second prize at the 2017 Wigmore Hall International Song Competition.

Mr. Dugan advocates the importance of music in the community and at all levels of society. As a founding creator of Operation Superpower, a superhero opera for children, he has traveled to dozens of schools in the greater New York area, performing for students and encouraging them to use their talents – their superpowers – for good.

Mr. Dugan holds Bachelor’s and Master’s degrees from The Juilliard School, where he studied under Matti Raekallio. He resides in New York City with his wife, mezzo-soprano Kara Dugan, and serves on the piano faculty at the Juilliard School Evening Division. Mr. Dugan is a Yamaha Artist.

$20 Live Stream  |  Watch this incredible performance from your home through Veeps!

We are sold out for in-person viewing tickets for the Gerald R. Ford Amphitheater Pavilion. Please purchase a live stream ticket through Veeps to watch Joshua Bell & Larisa Martinez from the comfort of your home.